I am inspired by the words of Owen Roberts, whose column appears Mondays in the Guelph Mercury. Roberts teaches agricultural communications at the University of Guelph. He wrote about a major issue which I also have; the lack of public knowledge for agriculture and how events like the Royal Winter Fair in Toronto only worsen the situation.

My issue around this arose when an acquaintance tried to rescue flies from the sticky strip in my kitchen. I don’t want those critters, fresh from the manure pile out back, in my kitchen! I know that they too are sentient beings, and deserve to have their lives honoured, but this is where I draw the line (along with spiders). 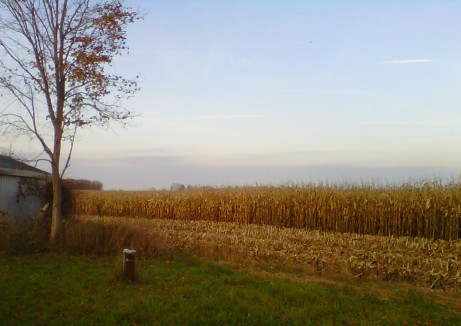 I was suspicious of the tell tale signs of toilet paper getting stuck on my fly strips. So, we had a discussion. I stated that the flies were creating a health issue when it came to a maggot problem I was dealing with. The response was that the manure pile was too close to the house. Perplexed, since the barn is not as close to the farmhouse as some are, I simply observed that it was sitting on a concrete pad just outside the barn, waiting for the opportunity of a freshly harvested field before it could be spread. (Never mind the idea of letting it compost first). The farmhouse where I live is surrounded by 8 feet tall corn plants and to me, it was obvious that the manure could not be spread at that time. The response I got was that the manure pile should then be buried. I wonder what feedback I might have received if we were talking about the liquid manure tank next door?

My question is: what can we do when eaters, including highly educated health professionals, don’t understand farming and what it takes to produce the food on their plate?

Owen Roberts’ agricultural communications students prepare speeches to compete with others from across the country in the Canadian Young Speakers for Agriculture contest, held annually in at The Royal in Toronto.

This contest is not about winning so much as it is about university students raised on farms having an opportunity to speak about what’s on their minds, to the public. To quote Roberts: “Certainly, there’s a strong temptation to chide the consumer for (their) lack of worldliness and awareness. But there’s a bigger message here — despite sincere efforts in some camps to educate and inform people about farming, they still don’t get it.”

He continues by discussing the Royal Winter fair and says: “the reality is the word agriculture has been dropped from the show’s name. Check http://www.royalfair.org, and you’ll notice it’s now marketed as a ‘horse show and winter fair.’” If the Royal felt agriculture was a strong attraction, why did it drop agriculture from its name? What is the message here? Do urban people think that agriculture is about horses? 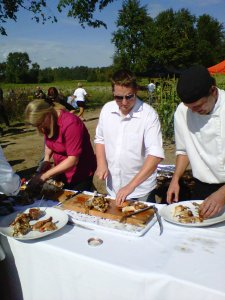 I find the same problem occurs with culinary events. The marketing of these events uses the stories of farmers and the harvest to draw a crowd, and then when attending the event, the farmer has been forgotten. A classic example is the Brickworks Picnic two years ago, when a 40 photo blog was published about the event, and only one photo featured a farmer (a well known one wearing the business’s logo on her shirt). It was the only photo that did not have the name of the person in the picture.

Agriculture and food processing is the number 1 industry in Ontario. How can we engage eaters to become more involved, to care about what they are eating and to understand agriculture and that when they overtake a slow moving vehicle on the road, that they are overtaking a farmer headed to their job, to produce food for cities and many other communities of people.

Just think: if everyone in the province were to re-direct $10 of their weekly grocery shopping to the purchase of local foods, this would result in a $2.4 billion increase in sales of Ontario grown and create 10,000 jobs. The agri-food sector is said to employ more than 70,000 people and contribute more than $33 billion to the provincial economy. It’s time we take farming seriously.

#SayItLikeItIs: Kaytlyn writes not only about applying a spiritual care therapeutic model to farming, but also how collective cultural narratives impact the choices we make that result in a pervasive "don't care" attitudinal construct towards Earth and Her landscapes. (formerly Gayl) View more posts