I am so inspired by Brent and Gillian of the New Farm in Creemore, Ontario that I am re-posting a story written for the Ontario Culinary Tourism Alliance about their farm operation. You will find the factors that contribute to farm viability (see previous post) in action when you read their story.

The Muscle behind The New Farm
by Laura Buckley on August 19th, 2010 for the Ontario Culinary Tourism Alliance

In 2003, Brent, his wife, Gillian Flies, and their two young children gave up their city life in downtown Toronto (Brent was a producer for CBC and Gillian worked in a public-sector management consulting firm) and bought a 100 acre country property. Brent says they never intended to become farmers, but somehow, “and I don’t even really know how or why it happened,” says Brent, they’ve ended up with a 13-acre garden where they grow a variety of heirloom vegetables. Twice a week 100km Foods arrives and fills their truck with a rainbow-coloured array of organic root vegetables, tomatoes, cucumbers and cut salad greens and heads back into Toronto to sell the goods to anxiously awaiting restaurant chefs. The Prestons also sell to restaurants in Collingwoood, through San Filippo Foods, and have a stall at the Saturday farmers market in Creemore. Brent says they’re making a living farming this way, but it’s not all about the money. 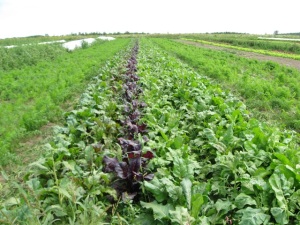 A significant part of what they do at the New Farm is working with The Stop. It is a community centre in Toronto focussed on en

ding hunger and food insecurity through its highly effective food education program, urban agriculture projects, community kitchen, and food bank. The Prestons fund-raise (with the help of their customers and chefs) to provide the Stop with produce for their food bank (upcoming event: http://www.thestop.org/event/18-sep-2010). Preston is quick to tell me that the vegetables that go into The Stop food boxes are exactly the same quality as they’re serving at Canoe. As well, independent retailers Fiesta Farms and The Big Carrot sell a line of vegetables labelled “Grow for the Stop.” Ten percent of the profits go to support the growing of the vegetables for The Stop food bank. Brent also tells me that they’ve recently been given an OMIF (Ontario Market Investment Fund) grant to help with the production of labels for the Grow for the Stop brand to help bring more growers and retailers on board with the program.

Brent and Gillian believe this is all part of the new face of farming, and the only way farming is going to survive. That’s why they are part of the C.R.A.F.T. (Collaborative Regional Alliance for Farmer Training in Ontario) program, which organizes internships to train people who want to learn to farm ecologically. This is the second year the New Farm has welcomed interns who come for the growing season (most stay for the full seven months, April to October) in return for room and board and a small stipend.

Brent (in orange) and Gillian (red wellies) with much appreciated help from C.R.A.F.T. interns

#SayItLikeItIs: In her two years of graduate work (2016-2018), Kaytlyn learned the art of bearing witness to an unheard collection of stories about human dignity. She first explored how she could apply a spiritual care therapeutic model to how farmers relate to their land. Realizing a greater cultural narrative was implicated, she then studied the impact of collective memory on cultural narratives and the pervasive "don't care" attitudinal construct towards Earth and Her landscapes. (formerly Gayl) View more posts